Numerous factors are proving beneficial to the global non-vascular stents market. The most prominent and obvious among them is the rising instances of chronic obstructive pulmonary disease (COPD) caused by smoking, lung cancer, tracheobronchial malacia, and exposure to harmful chemical. Other factors serving to boost the market are the increasing expenditure on healthcare in developing countries, proliferating hospitals and ambulatory surgical centers, and helpful medical reimbursement policies of governments and private insurance companies. Constant thrust on research and development to come up with better stents materials, designs, and minimally invasive stenting procedures leveraging endoscopes are also acting as tailwinds to the market.

Posing a roadblock to the global non-vascular stents market, on the other hand, is the expensiveness of the metallic stents coupled with governments and regulatory authorities, across the world, constantly revising healthcare reforms to improve quality of medical devices and bring down their costs too. 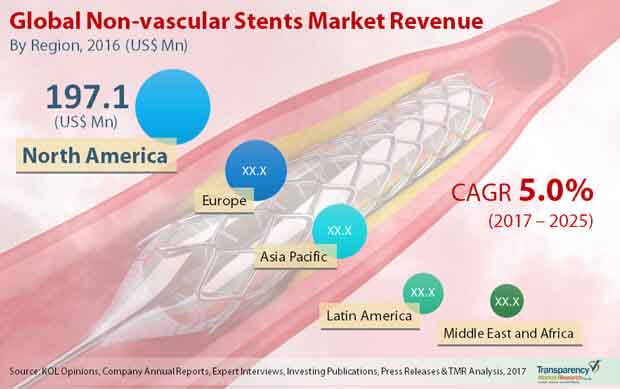 Based on the type of products, the global non-vascular stents market can be classified into urology stents, pulmonology stents, and gastroenterology stents. At present, the gastroenterology stents account for maximum share and going forward too, the segment is slated to hold on to its dominant share. Rising instances of colorectal and esophagus cancer, worldwide, is said to be the primary driver of the segment. In addition, emergence of technologically advanced stent designs, material composition, and novel stent deployment techniques such as endoscopic ultrasound guided (EUS) stenting procedures will also likely underpin the growth momentum of the segment.

In terms of growth rate, however, the urology stents segment is projected to take the lead in the next couple of years on the back of rising instances of kidney calculi and end-stage renal diseases, globally. A common trend of benign prostatic hyperplasia in elderly demographics is also projected to boost growth in the segment in the next couple of years. The urology stents segment is slated to register a CAGR of 6.9 % between 2017 and 2025.

Get Sample with Latest Research @ https://www.transparencymarketresearch.com/sample/sample.php?flag=S&rep_id=27980

From a geographical standpoint, North America accounts for a leading share by dint of having a robust healthcare infrastructure, high per capita spends on healthcare, a large pool of patients afflicted with obstructive disease, and helpful medical reimbursement policies by government as well as private players. The revenue in the region is expected to be worth US$308.1 mn by 2025. The CAGR clocked is predicted to be 5.2%. Europe trails North America in terms of market share in the non-vascular stents market. Growing number of hospitals and ambulatory surgical centers and rising prevalence of obstructive disease are said to be driving growth in the region.

When it comes to growth rate, Asia Pacific is projected to outpace all others with a CAGR of 5.4% between 2017 and 2025. Powering the growth in the region are fast-expanding developing nations of China and India with increased allocations for healthcare and rising number of hospitals and day care surgery centers.